So there’s this new movie coming out soon called Deliver Us From Evil.  It’s a story about a cop who goes around to all these spooky looking places filled with spooky looking things, as spooky people jump out of the shadows at him, seriously giving him the spooks.  The trailer has some well-done looking scenes, including a particularly unsettling scene with a plush owl that falls off a shelf and rolls toward a little girl in bed.  And what’s the cause of all this weird mayhem and spooky things?  Why of course, people are being possessed, for like the twentieth time in the last five years.  You’d think for once the exorcist would actually be worth a damn.

It’s no secret that movies these days tend to be criticized for being unoriginal, being based off of some kind of source material or being a remake of an older movie.  But horror movies in particular are notorious for that.  Even the Paranormal Activity franchise, a series I like, is all about demons.  It seems like every horror movie I see a trailer for ends up being about demons or hell.  There was one I learned about a month or two back called As Above, So Below that actually seemed intriguing.

It was about this group of archaeologists or something that decide to go down into the catacombs of Paris, which are notorious for being disturbing.  Predictably they get trapped and bad things start happening.  But it gets interesting in the trailer when one of the characters finds a piano that he remembers from his childhood, with the same broken key on it and everything.  So what’s the explanation for all of it?  Turns out it has something to do with the gates of Hell.  Of course.  It couldn’t actually be anything interesting could it?

Even video games have run into a dry spell when it comes to the horror genre.  Too many of the games today focus on loud pop-up scares and objectives along the line of “collect eight whatever and escape”.  Or they don’t even try, giving you mounds of ammo for your weapons and focusing more on creating big explosions than any actual ambiance.  Horror needs to be subtle in a lot of ways.  You can’t be truly scared by something if it just instantly jumps at you.  It needs to stalk you in the shadows first, allowing you to catch a glimpse of it as it skitters away into the darkness.

If this was a horror movie, there would be blood and pentagrams drawn on the wall. Because spooks. (Dark Fall The Journal.)

This is something that the Paranormal Activity movies are so good at (with the exception of number four).  They build up the tension with little odd things happening during the nighttime segments, which slowly build up into crazy disturbing things by the end of the movie.  Few people seem to realize the importance of build up.  It’s that feeling when something gets under your skin and creeps you out.  It’s that feeling that you’re being watched, that paranoia of what could be around the next bend.

Video games in particular are in a unique position to create some truly atypical horror experiences.  Eternal Darkness is one of those games that I feel really broke the mold, even if it is over a decade old now.  It not only had your typical freaky monsters, but it messed with your mind.  It would commonly break the fourth wall, making you think your controller was unplugged or that your TV turned off.  It even makes you think you accidentally started deleting all your saved games.  These moments are what makes it one of my favorite games of all time.

This is the kind of thing I want out of horror these days, some level of originality.  We can all agree that an abandoned mansion, asylum, hotel, or whatever is creepy, but there are ways to be creepy without always resorting to well-tread ground.  Part of the reason I talked about the horror games I’ve played, such as the Dark Fall series, is because I feel they find ways to unnerve or scare me without resorting to jumping in my face and screaming “BLARGH”.  I will admit that those scares can make me jump (hence the name “jumpscare”), but they don’t leave any lasting impression.  It’s that momentary knee-jerk reaction, followed by a weary sigh of knowing that they used the oldest trick in the book.  Loud noises aren’t that scary.  They’re mainly annoying.

But I do really get tired of all the demon story lines.  This family has an ancient secret, involving demons.  This house has a terrible history…involving demons.  This forest is known for being haunted……by demons.  This person actually IS a demon.  It just gets old when every demonic possession movie involves someone screaming “get out” in a deep, gravely voice right before a door slams shut.  Yeah we got it.  They’re possessed.  It’s spooky and stuff.  It’s not like demons are intrinsically bad as horror tropes, they just get old when they’re in pretty much every modern horror movie. 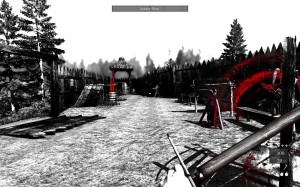 Betrayer is a new game I’ve started playing recently. It takes place in the early 17th Century and involves all sorts of supernatural weirdness. It’s not a jump out at you kind of horror game, but it’s dripping with atmosphere. It’s something unique in a sea of clones.

I guess what I’m trying to get at here is that we should be trying new things.  Yes old castles are scary.  Yes demons are freaky.  Yes dark forests in the middle of the night are creepy places to be, but they’re all so obvious.  That’s the problem with them.  We know them too well, so we expect there to be spooky things there.  There are settings out there that are ripe for horrific atmospheres and stories, such as the bottom of the ocean.  Being trapped deep beneath the ocean surface is a terrifying prospect for me, and one I don’t see explored often.

Horror as it is right now is stuck in a deep rut.  It’s a record that is constantly skipping.  If it stays that way, I’m fairly certain it will eventually die out.  There are interesting ideas out there, in both games and movies, but there need to be more of them.  I’m all for dark corridors and distant, creepy noises, but sometimes I would like to be exposed to something new.  With modern technology we can go places and explore ideas that we had no conception of even just fifty years ago.  The problem is that people become all too content with the old and the familiar.  There’s nothing wrong with the safety of what you know, but all of human experience didn’t come about because people stayed with what they know.  Embrace the unfamiliar, and you might be surprised with the results.

And that’s all for this week.  Next week’s post will be barely illuminated by your flashlight as you pull open the old wooden cellar door.  Until then, have a great week everybody.