Happy Halloween everybody!  Even though it’s not technically Halloween yet…it’s two days away still…um……STOP LOOKING AT ME LIKE THAT!

I figured that in honor of this holiday devoted to all things creepy and kooky, I’d take a look at why horror and scary things even has an audience in the first place.  It seems vaguely masochistic doesn’t it, putting ourselves in a position of fear and anxiety for the purpose of entertainment.  To someone on the outside, fans of horror must seem a little deranged.  So then, why it is popular at all?  Why do people enjoy terrifying themselves with gruesome and disturbing things?  What is the allure of the scare?

The simplest explanation is one of machismo.  Plenty of guys love being the ones that say “that didn’t scare me at all”.  They like being able to say that they sat through an entire horror movie or played through an entire horror game without even flinching.  It’s like a badge of honor for them, a testament to their tough skin.  It’s wish-fulfillment in a way, to be able to say that they looked into the eyes of the beast and didn’t blink.  Of course, this is only one of the possible explanations for the allure of horror.

But let’s go deeper than that.  It’s easy enough to say that some people enjoy the thrill of a scary movie, but it doesn’t go far enough in explaining why.  What is the appeal of horror?  What lies beneath the surface that gives people such a thrill out of watching them.  The people who enjoy saying they weren’t scared, the appeal for them is pretty clear-cut.  But for the people who enjoy the sensation of fear in a game or a movie, what’s their appeal?

It has a lot to do with the idea of helplessness.  Many movies and games out there are power fantasies, structured in such a way that it gives the audience a sense of overwhelming epic scale, a sense of being powerful when so many of them probably feel powerless in their daily lives.  But horror is different.  Horror doesn’t make the protagonist seem like a triumphant hero, legendary character, or all-powerful god in any way.  Instead, horror reduces its protagonist to a simpler and more pitiful form.  In many ways, protagonists of horror are far easier to identify with than any other genre.  They seem much more grounded and normal (although in some cases undeniably and unbelievably dumb).  This leads to a much stronger sympathetic attachment to them, which makes the ensuing trials the character must face much more poignant and affecting. 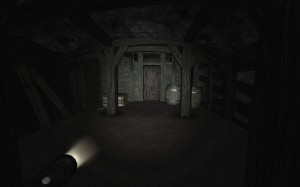 Part of horror’s appeal has to do with the novelty of it all (an ironic statement considering how cliché most horror seems to be these days).  It’s a change of pace to see a character in a position of powerlessness, or, in the case of games, to BE in that position.  We’re so inundated by tales of heroism and larger than life characters that it’s nice to sometimes see something that comes across as much more intimate and psychological.

This is nice and all, but let’s even deeper.  Why are these intimate portrayals of conflicted characters and devilish scenarios so popular with us?

I can chalk it up to two words: morbid curiosity.

Some of the most powerful and memorable horror stories in my mind are the ones that present us with the portrayal of a character who is driven to do horrible, unspeakable things.  These characters were normal and well-adjusted at one point in their lives, until some event or series of events started their downward spiral.  One of my favorite video game series, the Amnesia games, dances with this theme very often.  The two games focus on a central character who deals with extraordinary and devastating circumstances, and spend the rest of the game piecing their shattered memories back together and then coming to terms with the atrocities they commit.  It’s a tale of redemption, or at least attempted redemption.

Stories like these remind us of our darker side, that aspect of humanity that most people tend to shut out or ignore, for fear that acknowledging it causes it to flourish.  It’s this aspect you see on the news whenever they talk about a horrible crime or violence in some far off country.  You are reminded in those instances that humanity is not perfect, that we are far from it in fact, and that some people will give in to their baser instincts and act out of pure greed and self-interest.  And some people just like to cause pain and suffering for reasons unknown.

I’ve always loved getting into the head space of characters like that, people who either just enjoy mayhem and carnage, or people who are driven to such a point that they engage in morbid activities that their former self never would have even thought about.  Regret, pain, and suffering are all part of the human condition that we have to confront from time to time, and horror stories give us a glimpse into these aspects through a safety net that allows us to experience these things without dealing with the real world consequences.  In this way, horror can be extremely character driven.  However, it can also just be pure shock value, featuring teenage girls being chased down and brutally murdered by a masked man wielding a sharp implement of some description.  Some people like that kind of thing.  I tend to gravitate toward the former.

Horror serves as a reminder that we are not invincible.  Human beings are fragile, and can fall victim to so many different dangers in the world.  We might put on a brave face and say “I’m not scared of this” when we  watch a horror movie, but we are simply aware of the safety net that the movie throws up around us.  We are not there.  The situation is not real, and neither is the danger.  Are we really just that brave?  Or are we simply in denial because the character on-screen is not us?  Think about that next time you watch a movie.  Think long and hard about that, and ignore the shadow creeping up behind you in the dark, edged with malice, waiting for the perfect moment to strike and savor your succulent form.

But that probably won’t happen.  Probably…

And that’s all I got for this week.  Enjoy your Halloween, whether you be trick or treating, or just staying inside watching a scary movie or playing a scary game.  Until next time everyone.  Have yourselves a wonderful holiday and a great week.

One thought on “The Allure of the Scare”